How to use ultrasound to identify the spine: 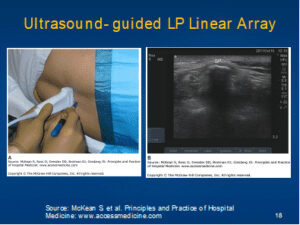 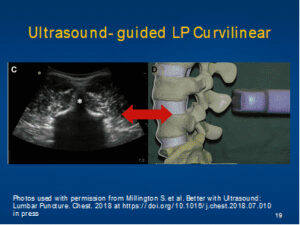 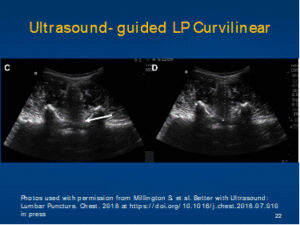 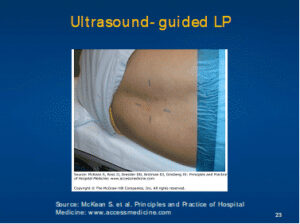 Lumbar puncture (LP), commonly performed in infants to rule out meningitis, is often not successful in the hands of inexperienced operators. Investigators conducted a study of 128 infants younger than 6 months. They compared traditional LP to LP preceded by ultrasound-guided skin marking of anatomic landmarks.

Ultrasound-guided marking was performed by one of three operators: a board-certified pediatric emergency physician with advanced ultrasound training, a senior resident, or a medical student. The resident and student completed a brief ultrasound course and identified the landmarks successfully on at least five practice cases prior to this study.

Fifty four percent of LPs were performed by operators with minimal or no LP experience.  LP success was defined as cerebrospinal fluid obtained with red blood cell count <1000/mm3.

First-attempt LP success was attained in 58% of infants in the ultrasound group versus 31% in the comparison group. Success within three attempts was attained in 75% versus 44% of infants in the ultrasound and landmark groups, respectively. First-attempt success rates were 41% for operators who had performed less than 11 LPs and 52% for those who had performed at least 11 LPs (not statistically significant difference). 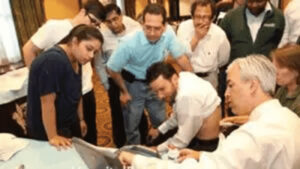