Simulation-based procedural training has become increasingly popular in academic medical centers and among medical trainees.  Limited data has suggested that simulation based training improves success rates and safety, but evidence has been limited to small single center studies.  In February, 2014 Madenci et al. published a meta-analysis evaluating the effect of simulation based training on success rates and number of attempts for central venous catheter placement.  The authors evaluated 3 randomized controlled trials and 2 prospective cohort studies.   This study differed from prior evaluations of medical simulation in that it examined the effect of simulation-based training on real patient outcomes.   Three randomized controlled trials and two prospective group-cohort studies were included.  A total of 487 medical trainees performed 942 procedures.  All but one trainee were resident physicians.

There are 270,000 preventable deaths in U.S. hospitals each year.  Many of these deaths result from procedural complications.  The balance between patient safety and trainee experience has historically been a difficult ethical balance.  This study demonstrates that for central line insertion, we have a tool in our armamentarium to improve patient safety while allowing trainees to gain procedural skills necessary to their profession.  Training programs should pursue simulation-based training for novice proceduralists. 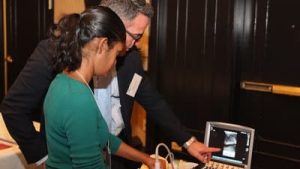 Madenci, et al.  Central Venous Access by Trainees;  A Systematic Review and Meta-Analysis of the Use of Simulation to Improve Success Rate on Patients.  Simulation in Healthcare.  Vol 9, Number 1, February, 2014. Link.